31 Division - Always open to the community they serve

A cut above the rest

Places to cool down in Emery

Places to park your worries and cares 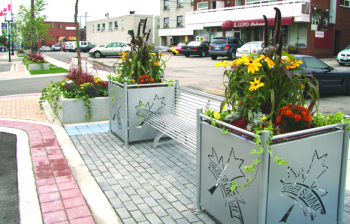 The area known more recently as Italian Gardens in Humber Summit was for many years, a significant destination place for shoppers and homeowners to the affluent subdivisions adjacent to the Humber River.

Humber Summit had a proud history before this as a settlement for United Empire Loyalists at the beginning of the 1800s. Along with other immigrants from the UK, settlers sought to exploit the abundant resources and opportunities of the riverside location. Eventually, the growth of the residential neighbourhoods spawned a vibrant commercial district that to this day, despite it challenges, plays a crucial role as a public space for the community.

Over the years, residents moved away, and shoppers went elsewhere, lured to larger facilities being built in other areas of the Greater Toronto Area (GTA). It became difficult for the small shops in Humber Summit to compete with the selection, price and allure of the newer indoor malls, and the eventual emergence of the big box stores and grocers. The local shops suffered, and finally, the commercial area lost its anchor with the closing of the last grocery store. In addition, the strip mall concept, which was popular at the time of the areas dominance, began to shows its flaws and limitations when faced with significant changes in demographics and shopping habits. Tension developed between the owners of the small strip mall shops whose shared responsibilities for upkeep, maintenance and improvement, were tested by conflicting ideas of who should pay and how much should be done.

Prior to our project at Satterly Road and Islington Avenue, the intersection was an eyesore with piles of garbage, discarded mattresses and abandoned cars and everyone complained of vandalism, crime and frequent break-ins. The predominant visual feature of the strip malls, mainly the overcrowded parking lots, didn’t help draw pedestrians nor add to the shopping experience.

The plaza on Plunkett Road, tucked away in a residential side street, had several more challenges including poor lighting, neglected or empty storefronts, broken asphalt and the absence of greenery. Our objective was to recreate the serenity of a garden, with the colours, surfaces and lighting to transform what was a harsh and unwelcoming environment. We sought to bring pedestrians back to the streets, and shoppers to the stores that await them.

We realized in our conversations and consultation with the shop and property owners that they lacked both the resources and confidence that change was possible. Our first task was to provide them with the tools to make their own decisions and build their capacity to work together. We saw our physical infrastructure project as a catalyst for this change.During the construction phase, we overcame the local cynicism and began to witness a return of a pride of place that was previously lacking.

On September 14th, 2013 we hosted our first Annual Wine Fest in Humber Summit. Traditionally, fall festivals are celebrations of the harvest. To us, it meant more, a celebration of the renewed community spirit we witnessed that day among the hundreds that turned out.