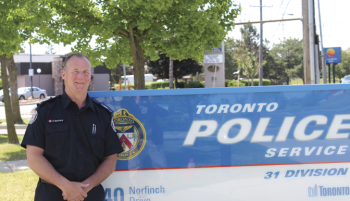 Richard Blanchard is retiring after 30 years with 31 division and the community will feel these empty shoes left behind.

Blanchard grew up in a small town outside Toronto – a self-proclaimed country kid who had no idea about the city. He’d applied to a number of policing opportunities and after a number of declines, applied in Toronto. One year later he was on the job.

He was a young kid who was naïve about the big city. Admittedly scared and unsure, he said he was very fortunate to have strong training officers.

After a year in uniform a skill set was identified and he spent five years with a major crime unit.

“I got to see different facets of policing there, different issues that were ongoing in different areas of the city,” he said.

He found he enjoyed the work with youth in community schools and began to focus on getting to the root cause of issues.

At the Royal York subway, a rash of robberies and a growth in the number of schools had the community asking questions. But working with the city and local organizations, Blanchard turned his thoughts to environmental design. His working group saw benches and other clutter removed creating movement in the problem areas.

What’s causing crime? Where can the detachment look to help? And what other resolutions can be attempted? Were Blanchard’s priorities.

“You do get successes out of it, seeing the communities change,” he said.

After his work in the crime unit came a promotion to staff sergeant and an invitation to run the unit in Emery. He said he’s met too many great people and organizations to list.

“Seven years has passed by quickly.”

“The relationships these guys have built with the community,” Blanchard said about what’s made him proud. “It’s grown to the point a number of them are doing stuff on their own time.”

“I have been extremely fortunate to have worked with Staff Sergeant Blanchard over the past years, a man with a tremendous work ethic who genuinely cared about improving the well-being of our communities. Rick invested a lot of effort in relationship building, he was convinced that developing strong relationships amongst ourselves and with our residents were the keys to a strong vibrant service and community.

Rick will be missed but he leaves still buoyed with energy and I know some community will be the recipient.”