Every year, Nov. 11 is a day of remembrance in Canada. The day allows an opportunity for everyone to give tribute to our fallen soldiers of the past. We can reflect upon the enormous loss of lives and those who sacrificed their own to maintain peace and freedom for everyone. It has become a day to remind Canadians of the savageness of two world wars and to never forget the sacrifices of those “glorious dead” of yesteryear.

In war, there are always civilian families around the world that become detrimentally impacted by the hostilities. Regrettably, civilian children can be part of this grim category.

One Canadian soldier’s life in particular would be changed forever after witnessing the horrors of our conflicts.

This returning Canadian veteran of D-Day went on to nurture a sense of obligation and make certain that he would give all that he could to assist those less fortunate.

On Feb. 4, 1919, Bannon was born in Scotland. At the age of seven, his family moved to Toronto, Ontario. With the onset of the Second World War in 1941, Bannon along with many of his male relatives, signed up for the war effort. 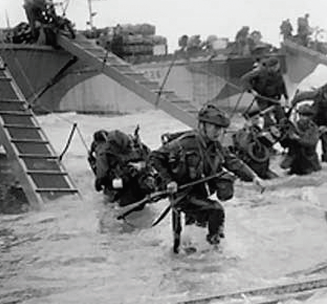 He decided to enlist into the Royal Canadian Air Force (RCAF) and would spend the next four years training in London, England. In 1944, Bannon and his division became part of the Canadian armed forces that were to land at Juno Beach for the massive D-Day invasion.

It was on June 6, 1944 when the most complex military operation in history occurred.

General Dwight D. Eisenhower of the United States of America would coordinate and oversee all operations of this invasion. The plan was to drive back the heavily armed and bunkered-in German militaries that were established on the west coast of France.

The strategy included 14,000 trained Canadian troops within the 135,000 soldiers to be engaged in battle.

The Canadian forces were expected to land at Juno Beach as a secondary component of the entire operation. The majority of U.S. forces were sent to land at Omaha Beach.

The Canadians were aimed at 80 km of mostly flat, sandy beach along the coast of Normandy. By the end of the 10 week military campaign, 5,500 Canadian soldiers were killed in action. Most of whom are buried in Canadian cemeteries at Bény-sur-Mer and Cintheaux in France.

The Second World War spanned several years with many soldiers not only fighting for our country but assisting in transporting much needed equipment and supplies.

Joseph Bannon returned home to his family in Canada and fortunately his wartime experience had a positive impact on his life. After being decorated as a war hero, Bannon’s new mission began.

After the war he settled with his family in a subdivision being built along Weston Road north of Wilson, just east of the Humber River. The community would be named Humberlea. Bannon was able to move into a newly built “war home” constructed for returning veterans and their families. His experiences during the war had him witness tremendous amounts of physical devastation, suffering and loss of life. The loss of adult life throughout the world left an unnecessary abyss for surviving children of the war. Bannon would develop a life-long commitment to the care of these children.

In addition to their own two children, Joseph and Doris May Bannon became foster parents to more than 150 children – seven of which they ended up legally adopting themselves. In 1960, the Bannons were recognized for their commitment and named Foster Parents of the Year by the Catholic Church.

Joseph Bannon was a caring and trusting neighbour, as well as a founding patron of St. Jude’s Catholic Church on Weston Road.

He resided in the same post-war home for more than 66 years in the Strathburn/Gaydon area. He is remembered for extending heartfelt greetings, warm welcomes to newcomers and for being a community steward. He conscientiously engaged his community with a sense of civic responsibility and respect for others.

Recently, a park has been dedicated to the memory of one of Humberlea’s greatest community champions. A statue of Bannon in full military uniform attire stands magnificently in the Joseph Bannon Park. The park is located in the new community south-east of Sheppard and Weston (where Woolco used to be).

Bannon passed away in September 2007 at the age of 88. His quiet devotion to his faith and fellow man shall not be forgotten. A Remembrance Day ceremony took place on the 11th hour of the 11th day of the 11th month (ie: Sunday, November 11th, 11:00 a.m.).

It was attended by City Councillor Anthony Perruzza, his wife Keyla, their children, our M.P.P. Tom Rakocevic, Const. McDermott of 31 Division and the Bannon Family along with 60 residents of the surrounding community.