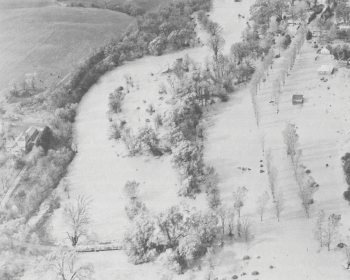 Issac Devins, a Pennsylvania German, was the first settler to arrive in the community and in 1795 built a log cabin beside the banks of the Humber River close to Finch and Islington.

The earliest settlers were Pennsylvania Germans, Huguenots, Lutheran and Mennonites. They were followed in 1820 by settlers from England, which included descendants of the Rowntree family.

The village of Humber Summit itself was founded by United Empire Loyalists who mainly farmed and established sawmills and gristmills that coincidently were the speciality of Englanders.

Priority shifted over time to the building of churches, inns, schoolhouses and finally the railway in 1870. The churches and schoolhouses quickly became the centre of the cultural and social life of the area.

Humber Summit developed into a popular milling community with the advantage of having the major Humber River nearby. When the introduction of new technology in steam driven mills appeared, this led to the eventual decline and demise of this village industry and the interdependence by farmers and millers. Most farms in the area were based on large tracts of 100 or 200 acres lots. Road access was remote and difficult and most farms had mixed farming that included orchards. Some of the area’s fruit and apple varieties included Harvest, Pee Walkie, Crab Apples, Greening, Tolman Sweets, Snow and Pears. There were numerous varieties of apples since different types matured at separate times of the season and many were then put into some kind of storage, as well. 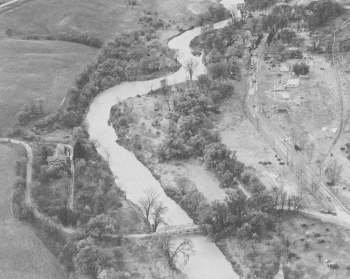 Joseph Rowntree was a pioneer in the northerly Etobicoke village of Thistletown and he established two mills on the banks of the Humber River starting in 1843. First, a sawmill on the east bank of the river and five years later, a grist or flour mill on the west bank. His mills were known as the “Greenholme Mills” and operated profitably until the end of the nineteenth century. After this, a large section of his land became used as a park by the surrounding community and named the River Bend Park.

Humber Summit had actually been widely referred to as Pine Ridge up to 1937 when Garn and Viv Evans applied to open an official Post Office in their local store along Islington Avenue. They found out that the name had already been used in Ontario by a small village south of Petawawa and north of Pembroke close to the Ottawa River. The Evans family were however familiar with a steam train that came from the Town of Weston and travelled to Woodbridge, having to go up a steep incline nearby. A maintenance stop just north of Steeles Avenue had a water tower that would allow trains to fill up from the Humber River and continue their journey north. This location had been called The Summit of the Humber and that`s how the community name of Humber Summit originated. The Evans’ family Humber Summit Post Office opened for business in the community in 1937. Notable local family names included Rowntree, Evans, Duncan, McClure and Plunkett. Humber Summit was known as a vacationing summer retreat cottage community in the 1930’s with cottages built on Riverside Drive that connected all the way through the park ending at Rowntree Mills Road.

Humber Summit’s children had long been required to walk the long trek to the Emery Public School at Finch and Weston Road until a very small two-room schoolhouse was finally opened in 1951 along Whitfield Avenue and was known as the Humber Summit School on Borden Avenue. The last artifacts remaining from Humber Summit’s pioneer homesteaders rest peacefully at the Pine Ridge Cemetery located on Islington Avenue and Rowntree Mills Road. 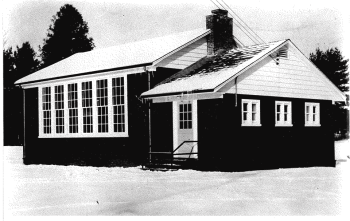 In 1954, Hurricane Hazel ripped full-force through Humber Summit as the Humber River flooded six feet over its banks. The flooding and raging river completely wiped out 12 cottages at the far west end of Riverside Drive.

This disaster unfortunately diminished Humber Summit’s status as a summer retreat. The heroic efforts of Charlie Jordan (Chief of the Humber Summit Volunteer Fire Brigade) saved all of Emery’s and Humber Summit residents’ lives on that tragic evening in 1954. In the wake of the hurricane, the government acquired thousands of acres of flood plain and valley lands and created the Metropolitan Toronto and Region Conservation Authority to govern its use.

By the 1960’s a major deviation in population growth and makeup occurred that coincided with the influx of immigrants to Canada from countries other than the United Kingdom. In Humber Summit, population growth was fuelled by many Italian immigrants that moved into the new subdivision along Finch Avenue and north of Islington. The numerous Italian families choosing to move to Humber Summit were obviously influenced by the creation of Camillo Milani’s Italian Gardens Recreation Facility at Islington and Finch.

This number almost doubled over the next 10 years to reach 520,000 by 1972. This population growth was noted as one of the most dramatic increases ever witnessed in Canadian history. Humber Summit was one of the last suburbs to experience the ultimate commercial and population growth and the community was later known as the “Forgotten Corners.” 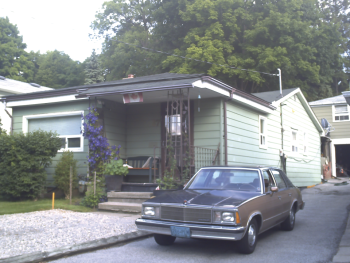 In 1969, Rowntree Mills Park name was changed from River Bend Park on 92 hectares designated as official conservation use. The park had luckily been spared from being designated as a main dump and land-fill site for the Township of North York’s only by the efforts of Alderman Fred Young. The park was suitably re-named Rowntree Mills Park after Joseph Rowntree who had operated the Greenholme Mills in the 19th century.

In 2009, Rowntree Mills Park experienced major nuisances such as large and loud speakers being used with raunchy parties. Through an extensive community consultation, it was decided that closing the park to vehicular traffic might serve to curb these problems.

The Etobicoke Guardian reported that ratepayers’ head, Peter Vecchiarelli, was in favour of banning cars into the park and was quoted that he also wanted cars not following rules on surrounding streets to be towed instead of being ticketed. As a result, cars have now been completely banned from entering the park (unless someone is to apply to the City for a permit to do so).

Persons in vehicles that wish to enter the park have only been able to park their cars on Riverside Drive at the far north end of the park but only on the south side of the street. On Rowntree Mills Road, both stopping and parking is prohibited at the section of the road closest to the park, west of Emily Street. Currently, cars are only able to park in excess of 200 metres from the main entrance of the park. People wanting access are forced to walk into the park on foot now. Bicycles however, are permitted full entry access into the park along the 15 paved trails that actually travel all the way down to Lake Ontario too. The banning of cars into the park was done to cut down on nuisances and problems in the park. Only allowing pedestrian or bicycle access into the park was supposed to solve the problem of annoyances to the neighbouring homes nearby. Instead it seems the biggest problem now is finding a close legal parking spot on a surrounding street close to the park. 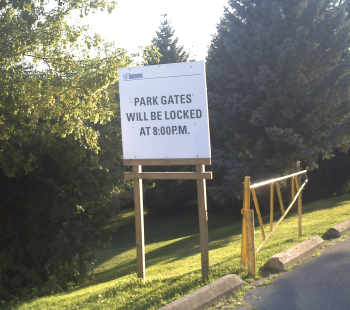 Today, the rules for entering the park by vehicle have recently been loosened but only for the far south-end entrance into the park, close to Islington and Finch. This parking lot accommodates only about 50 parked vehicles however. Signs are posted notifying drivers that they may have access into this lot from 8:00 a.m. to 8:00 p.m. City staff from the Parks and Recreation department are present at 7:45 p.m. to urge people to exit their vehicles before the parking lot gates are locked up at 8:00 p.m.

What a shame that the huge parking lot located close to the park’s central Field House and washrooms can only be used by applying permit holders only. There are possibly other alternatives to police the park and minimize the various nuisances that occur rather than to merely ban all vehicular access. To date, it seems that no one who resides close to the park is willing to compromise with a convincing enforcement measure that would allow our community full access into Rowntree Mills Park by vehicle and be allowed to park their cars in the main parking lot. If we could, the majority of people would be able to enjoy relaxed access and take part in necessary recreational activities for the summer in a way that our entire community is deserving of at Rowntree Mills Park.