Emery Village has always been noted for outstanding individuals that originate and reside in our community, and it is their accomplishments that have helped put Emery Village on the map.

In 1870, Emery Village’s first train station was opened for the community and was connected along newly laid train tracks that run north and south parallel to Weston Road. The tracks 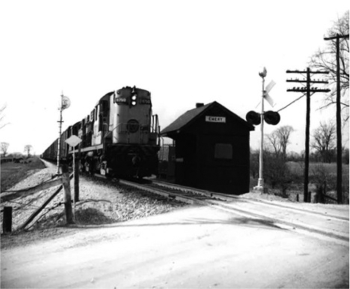 still exist in the exact location today where they take a forty-five degree corner at Finch Avenue and run north-west parallel to Toryork Drive. These tracks were built as part of the Toronto Grey Bruce Line that travelled up to Owen Sound initially. The freight service line and the tracks only run now to Orangeville since the narrow gauge lines originally built from Orangeville to Owen Sound have long been torn up.

Beginning in 1870, Emery Village had its very own Train Station stop situated just south of Finch Avenue on the east side of the tracks. The original station structure was picked up, moved and placed just north of Finch most likely sometime in the 1940s. Finally, Emery’s original train station building was eventually picked up and carted away from this final location around 1959 by the Canadian Pacific Railway.

Currently, the train tracks are used solely as a freight line and no longer have passenger service. For some time, there have been long-term plans to change the freight line to GO-Train service for passengers and re-open Emery Village’s train station but now it seems that this Toronto-Bolton line has recently been bumped down in priority sequence, by GO. The proposed location for Emery Village’s train station has long been planned to be built in the station’s original location. This is an area surrounding the Hydro Towers and the corridor land that encircles the parking lot near Finch and Arrow Road.

This proposal and official confirmation for the re-opening of our train station stop will require all three levels of government to request and spear-head a necessity. It has been obvious that GO have been dragging their feet on the project and have not moved forward to initiate the service line for us. City Councillor Giorgio Mammoliti has long been a solid visionary and supporter for the re-opening of our station but frustratingly points out, “The majority of the support does not lie with the city but lies with control and advancement by the federal and provincial government.”

The Federal M.P. of the area, Judy Sgro, did tell the Emery Village Voice that she is also supportive of the re-opening of Emery Village’s train station and she would commit to sitting down with all elected officials from our community and finally setting up a fitting plan to bring the station to Emery Village sooner rather than later. This is consistent with her position on community issues of the past. The office of our M.P.P. Mario Sergio upholds that transportation is a priority issue for York West. His office has informed the Emery Village Voice that he remains diligent to support “solid transit options” with Metrolinx however he remains open to also sit and discuss broader issues at a political meeting to assess any concept that would support and improve transit in our community. This means that the route towards official authorization and the re-opening of Emery Village’s new train station could now very well become “sooner rather than later.” A good start.