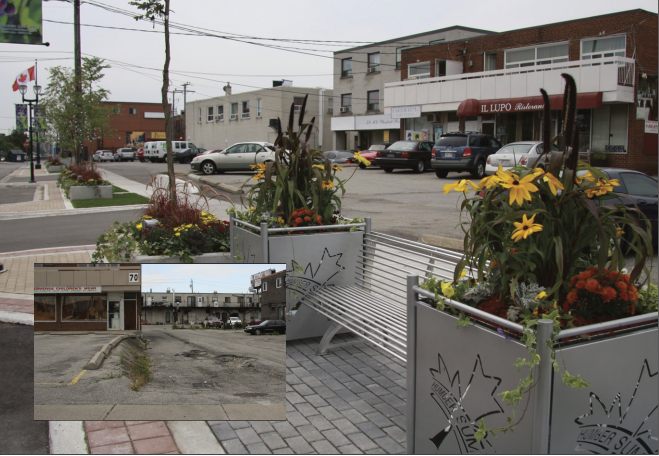 Sometimes convenience and necessity converge to create opportunity for advancement. Such is the case for the part of Islington Avenue that is at the heart of the Humber Summit community. Even though Humber Summit has from its founding been part of Emery Village, it has throughout its history, managed to retain a unique identity and proud countenance.

As we have reported before in previous articles, the area was long overdue for improvement. Beyond the aging infrastructure, both parking and garbage were atop the list of concerns voiced by local shop owners and residents.

Parking in particular proved to be a divisive issue. Business allowed parking in the front of their premises by illegally taking over city boulevard space despite several notices from the city.

Along with that, the boulevards became eyesores and magnets for dumping of trash, mattresses and derelict vehicles. As part of the effort to control what were clear contraventions, the City of Toronto moved to have the parking legalized for the businesses through a number of options, mostly in the form of negotiations with the parties in the hope of having clear considerations exchanged as settlement.

According to a City Transportation Services report dated August 31, 2009 to Etobicoke York Community Council, a directive was given to staff almost a year earlier to take appropriate action to “recapture” the municipal boulevards that had been illegally taken over along both sides of Islington Ave. between Finch and Steeles. 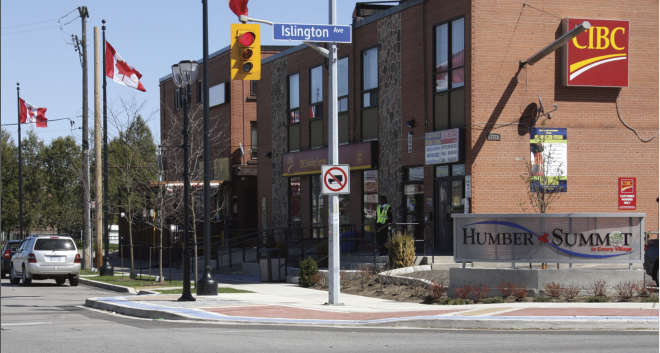 According to several neighboring businesses and residents, the City’s initiative with the property owners was met with mixed results, sparking several lawsuits by current business owners; one against a previous property owner, one against a real estate lawyer and one civil action against the city. Among these lawsuits was also a complaint filed with the Integrity Commissioner’s office which was deemed “frivolous” and was dismissed. All were defeated attempts and the city won the Court challenge initiated by a number of adjacent property owners resisting the city’s efforts. Following the court decision, a number of property owners in the Italian Gardens Plaza at 2965 Islington Ave. took up negotiations with the city in earnest .

In March 2009, Etobicoke Community Council passed a motion effectively empowering the local Councillor and the Director of Transportation Services “to work with the owners of 2965 Islington Avenue, as well as any other interested commercial property owners in the corridor on a plaza by plaza basis, and on a case by case basis, to introduce commercial boulevard parking and appropriate landscaping improvements to the boulevards adjoining their property, and that consideration be given to providing streetscape improvements or other boulevard beautification to the satisfaction of staff and the Ward Councillor at the expense of the benefitting property owners and in lieu of commercial parking fees.”

This essentially became the catalyst to resolving the matter of the businesses having had illegally taken over city property and an agreement was met to alleviate the parking concerns.

The second directive to transportation services effectively suspended the efforts to “recapture” the boulevards for a period of time, in effort to allow for the discussions and negotiations between the parties of those that had stepped forward to continue.

Unfortunately, some of the businesses saw this as an opportunity to not do anything despite the repeated warnings that status quo was not acceptable and the city would be moving forward to get back the property that had been illegally taken over. All the businesses were afforded an equal opportunity to provide solutions. In fact, they were presented with a landscape plan for the Islington Avenue frontage for much needed infrastructure improvement to revitalize and encourage new investments in the neighbourhood.

‘It remains our objective, to consolidate the splendid work that began on Satterly and on Plunkett, to the remaining commercial corridor along Islington Avenue. I look forward to the cooperation from the many business people on Islington who have approached me since those discussions, with their wish to join in having the revitalization plan fully implemented,” states councillor Giorgio Mammoliti.

For Humber Summit Plaza, Italian Gardens plaza, and the two plazas along Plunkett, their decision to join the BIA provided a dual role for them as the streetscape work not only enhanced their businesses on a visual level it also helped them comply with the city’s conditions. More important, the businesses in these plazas’ now enjoy the improvements to their parking and the beautification and enhancement to the pedestrian and shopping environment.

Lastly, the neighbourhood came together in September 2013 to toast and celebrate their new public space in the first Annual Wine Fest featuring local food vendors, musical talents and entertainment. A feat to be repeated and well anticipated for this year.