Councillor Giorgio Mammoliti arranged a ward 7 tour for Mayor John Tory in November and had the Mayor drop by the EVBIA ofices for a quick visit. Following up on the Mayor’s attendance at our last public meeting in the summer to discuss the plans for the LRT along Finch, Tory expressed interest and support in prioritizing the design changes and features for the upcoming $1.1 billion project. The Mayor heard first hand from some current and past Emery Village board members on how the congestion hurts their operations and increases the cost of doing business in our city. In addition, the Mayor commented that the relentless pursuit by Councillor Mammoliti to bring attention and resources to Ward 7 bolsters the position with respect to the discussions with the city and Metrolinx. The Mayor added that he intends to raise the issue at his upcoming meeting with Metrolinx Chair, Bruce McQuag. 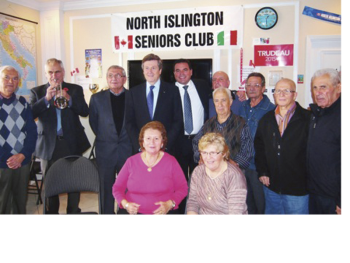 The Mayor had the opportunity to visit the North Islington Seniors at their social club and partake in a very festive lunch. After lunch the senior’s group had an engaging discussion with the Mayor along with local Councillor Giorgio Mammoliti about seniors having access to local meeting places along with their wide ranging general concerns for seniors and services within the City of Toronto. 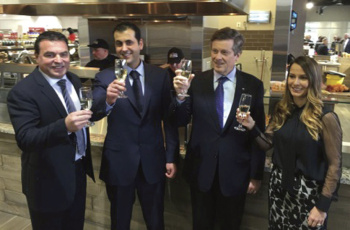 The Mayor had the privilege of participating in a ribbon cutting ceremony for the grand opening of the newly renovated Globe Meats. Dante DiBiase along with his family gave the Mayor a tour of the new spectacular Globe Market + Grill facility and provided a brief history on how the family business has evolved and become the success that they are today. Some say that the Mayor was in fine form that day and kissed the junior DiBiase as all good Mayors are expected to do! 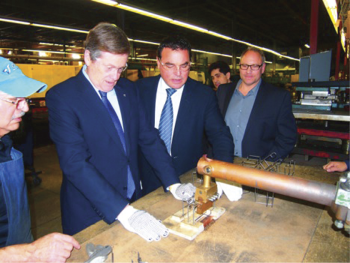 A visit to Metal Creations was an opportunity for the Mayor to see how one of Ward 7`s strongest businesses operate. The Mayor had the opportunity to participate and see how to complete a quick weld which involves one of the main functions for the completion of retail merchandise display in racking and shelving. Metal Creations.