You learn the secrets of success in business when you do two things – grow and innovate.

Through the acquisition of a number of new avenues, and a move to going green, Emery Village’s Jacobs & Thompson (JT) is an example of both.

Established in 1947, they remain one of the most experienced foam fabricators in North America, and the largest in Canada. Growth has been a focus throughout their history, a focus that expanded beyond their new products to the acquisition of other companies some time ago. 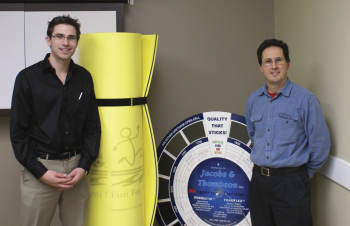 In 1999 and 2000 JT purchased two major foam competitors. In 2006, they acquired Edward Graphic Solutions, and began supplying foam mounting tapes to the flexo graphic printing market. In 2007, they expanded their reach into laminates when they bought up Sonatex and in 2009, purchased Sonatex competitors Globaltex and Laminated Textiles.

Riley Brand, Business Development Manager for JT explained too that they purchased the Walco division of E.F. Walter Inc in May of 2012. And growth initiatives led to them improving the laboratory testing abilities of JT to the point the company is now certified to perform laboratory tests for groups as renowned as NASA, were they requested to.

“We put our stamp on it, and this is as good as any other kind of lab,” Brand said. “It’s a neat company now the way it’s set up. And we really believe, the more products you have, the more services you offer, the more things you can get into. It’s a tough market and you can’t just focus on one industry.”

A lot of times, customers won’t even know how much JT is serving them Brand explained, stating today, the company has 182 parts in a certain style of Lexus automobile.

“You may not even know we’re there,” he said.

The company maintains an extensive network of sales and manufacturing representatives as well as partnerships with distributors and fabricators across North America, ensuring a top level of customer service.

But innovation is that other key. And with their green initiatives, JT is operating with the philosophy of leading the charge instead of following.

They follow the TOC philosophy, or Theory of Constraints, as well as a LEAN focus on their core service principles. It means they pride themselves on being energetic, focused and creative.

They’re testing that creativity with a number of environmental initiatives.

“You can say it’s the right thing to do, and it is being an industry leader and setting an example for other companies to follow,” said Peter Mauti, Maintenance Manager for Jacobs & Thompson. “But once you begin to study the ways to do it, and engage in the practices, it also makes a lot of business sense.”

The company has enrolled in regional and provincial energy conservation initiatives, including a recent partnership in the BOMA Energy, Conservation and Demand Program.

And in 2010, they finished a series of heat reclamation and retrofit projects at their Toronto facility.

Warm exhaust air was redirected from compressor and chiller units back into the facility using an in-line fan system. Block walls that are common to the exterior were covered with Canadian made Roxul mineral insulation. And they completed lighting retrofits in the Toronto facility, inside and outside of the plant. The 416 T-12 fixtures were replaced with 165 T-8 and light reflective PL Type fixtures.

“Our three main thrusts right now are our scrap material disposal, reducing emissions in our processes, and reducing our energy consumption,” said Brand.

And Mauti explained a number of ways even waste diversion can reduce the cost on bottom line and can even generate revenue if you can find a user for that waste stream.

“If you do the work, there are a lot of interesting ways to eliminate some disposal costs. And because these days your waste material can really be someone else’s raw material, it can lead to a way of meeting new customers too.”

In the production process, emissions are created during the flash off of solvents.

Mauti explained that JT is looking at the use of water based adhesives to reduce the amount of emissions released into the air.

“Water based chemicals release less emissions into the air and contribute to us lowering our carbon footprint.”

As they study their processes, they have found efficiencies as well, which have led to one of the most basic of environmental bonuses.

And they’ve even been open minded enough to look into their own cupboard for solutions.

“We make weather stripping,” Brand said. “And it forced us to look at our own, and now we’re weather stripped to the teeth. People don’t think about windows and doors, and the amount of heat loss that can occur.”

Add to it their addition of a Canadian made Roxul mineral insulation to company walls, and they’ve seen a massive reduction in their natural gas use.

“It all makes sense,” Brand said.

Jacobs & Thompson work with a combination of foam, adhesive, film or fabric. They laminate the materials into various layers based on a specific set of design criteria and can die cut, slit, spool and sheet them to the dimension and format of client require.

Their customized materials can be found in a diverse range of products such as helmets, military gear, automobiles, office furniture and safety equipment. Their foam, adhesive and fabric parts, even when not visually prominent, become integral components within their clients finished goods.