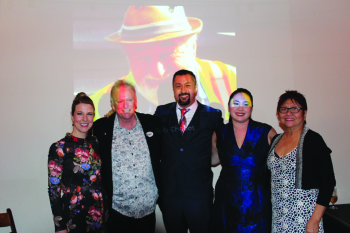 On Feb. 25, Centennial Sweeping held a gala dinner to celebrate 50 years of service. The celebration was held in honour of the late founder of the company, Bob Chabot, and took place at the Kortright Centre for Conservation.

More than 300 guests including friends, family and employees attended the event. Raymond Chabot , son of Centennial founder“ Big Bob” along with his wife, Christina Whelan-Chabot, did a masterful job as emcees for the evening. Close friends and family shared wonderful stories and fond memories of Bob and also included a touching tribute to some of the past employees that have passed over the years. Centennial Sweeping prides itself on fostering a close knit family relationship with all of their employees and it was clear how loved and appreciated their staff are.

Centennial Sweeping is a well known industrial service company located within Emery, along Toryork Drive. The business responds to road rollovers, turnovers and cleans up when spills occur. The OPP and MTO contact Centennial when an unlucky road disaster materializes and authorities count on them to deal with clearing the impediments as quickly as possible. Tow truck companies are dispatched by police separately and specifically trained professionals are called in to explicitly deal with individual hazardous materials.

Founder Bob Chabot began his life in Shawinigan Falls, Québec on November 19, 1942. He had one step-brother and one step-sister. Early in his life, his family moved frequently as his father worked for CN. 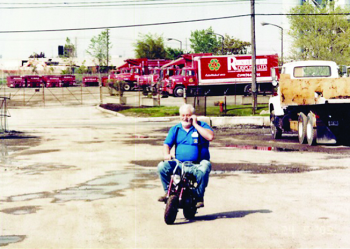 Bob Chabot initially opened Centennial Sweeping with his one and only truck, a GMC.(Notably, his true love was for Ford trucks, however.)The business eventually grew to more than 100 trucks and eventually occupied 47 acres of land.

Chabot purchased the property on Toryork Drive in 1994. St. Mary’s Cement had previously operated a cement bagging operation at that location. In 1994, Chabot opened his business and immediately built several maintenance garages that would be needed for his sweeping business – many of the trucks that he custom built are still on the road. The sweeping and removing units operate as well as they did from the day that they were first built.

Chabot’s son Raymond maintains the vehicles so that they continue their presence in tip-top shape. His work ensures that the legacy of his Dad’s vision lives on.

Bob Chabot was married to his loving wife Lina for 30 awesome years before he passed away in July, 2010 also leaving behind his two children, Lorraine and Raymond .

The Emery Village Voice sat down with Lina and Raymond recently to discuss the business, the man and their memories. 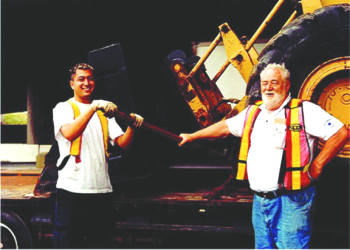 EVV: Tell us about how it all started?

Lina: He started with one truck. He worked with it and in it. He was a driver and salesman at the same time. Then he started getting orders and figured out that he should buy another truck and hire another driver. Now he had two trucks and got his first big job, his first big contract with the town of Durham. His first contract, he was so proud.

He got the contract to sweep. And now he could dispose of his first truck, a GMC, because he always loved the Ford. And it just kept on growing and growing. He now had six sweepers and six flushers. That’s when I met him.

EVV: How did you meet?

Lina: We met on a blind date, set up by my friend. She said ‘just so you know, a guy I know is going to call you.

I said excuse me, without my permission? He will just call? (She laughs) But she was my friend and said Lina, you will like him. So I go and all he talks about is his trucks. He talks about his job, he was so proud of it. We were compatible, we both loved to work. We dated, we clicked and the rest is history.

EVV: Tell us about a great day in the company together?

Lina: I remember he bought the new property, and I was doing paperwork. Our main purpose of buying the new property was to move Centennial out because we needed more land. In the new one we had nearly two acres.

He closed the gate, handed me the keys and said here, you run the business. I said, what? I don’t know what to do. He said you will learn.

All my counterparts went to university, and here comes Lina who doesn’t know anything, and I’m running it for 18 years. But that’s how we did it. We worked and learned together.

We were walking in the yard one day and he said to me “I can’t believe it”. I’ve surpassed my greatest expectations for a kid with a Grade 9 education. We were both crying. It was a wonderful moment.

EVV: What did you (the kids) think?

Raymond: I remember we came here at night. We were inside the office, the place had been abandoned for 20 odd years, it was dark, no lights, things were falling apart. I was 14 so I was thinking, oh, ok. (laughs). But we worked hard and made it what it is.

I was at the scrap yard during the summer, painting, sweeping, typical kid jobs.

EVV: When did you start full-time?: 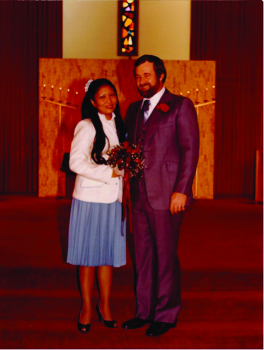 Raymond: I started full time around 20 or 21. I was just out of college and was done with the whole school thing and dad said, come on then, let’s go. I’d been around here forever, so I started driving, helping and running the place.

EVV: Tell us a story that describes Bob. What it was like to work with him.

Raymond: Dad was a big kid at heart. I started getting into toys, and really he liked that because he just wanted to live through me and play with all the toys. I had just gotten a Honda Z50 dirt bike. I told him to go for a ride and try it out and he was right into it.

My dad got on it, and his knees were far too high. He was riding up and down driveway on this little thing, and if anyone knew dad, the cellphone was always attached to his ear. So of course, doesn’t he get a phone call and answer it, and we have the picture of him driving down the driveway on this bike on the phone.

It was just hilarious.

My dad was a good time guy. A do the hard work guy, but always have a good time while doing it. That was my dad.