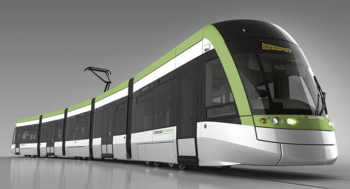 On June 17th at the Julius Banquet Centre on Arrow Road, the Emery Village BIA hosted a public meeting for the community that easily surpassed all public expectation and attendance records.

More than 500 residents crammed the confines of the hall to hear from officials from METROLINX about their specific plans for the new LRT on Finch, expected to begin construction in 2017.

Mary Di Mambro, the BIA’s consultant on this project, served as the meeting’s moderator and most eloquently and professionally set the tone for a productive session for all in attendance. The BIA’s Vice-Chair of the Board, Peter Mauti, opened the meeting up with a broad summary of the issues currently before review.

The meeting set a new standard of service with translation headphones available for Vietnamese, Spanish and Italian listeners. It turned out to be one of the most important community meetings in the last 50 years.

Contributing to the success of the meeting was the fact that both the local councillor, Giorgio Mammoliti and the Mayor of the City of Toronto, John Tory, addressed the audience, commented on the progress achieved by the stakeholders, including the BIA, meetings with Metrolinx and the City, and said that much work remains to resolve the issues around bringing rapid transit to the community.

Ward 7 Councillor, Giorgio Mammoliti, urged all residents in attendance to sign the petition pressuring the local M.P.P. Mario Sergio to engage on this important issue.

Mammoliti voiced that he was adamant about getting the Province to either provide surplus funding for the BIA’s recommended improvements to the plan or merely move towards building a subway along Finch. The petition is to be forwarded to the provincial legislature requesting funding in addition to the $1 billion allocated to building the Finch West LRT. Within the current funds, $18 million is allocated for the contingencies such as streetscape improvements and design modifications. However, it must also be noted that the original costing of the LRT is in 2010 dollars. 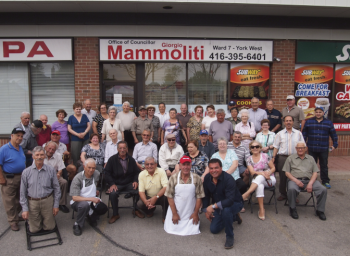 Did you hear that there is a new guy that moved into the Humber Summit? Yes our very own Ward 7 Councillor, Giorgio Mammoliti.

Giorgio and his office staff celebrated the official opening of their new community office by hosting a BBQ that was open for all to attend. The North Islington Seniors were on hand to help with the cooking duties. It was a well attended event and everyone went home feeling well fed and happy to have been a part of this wonderful community celebration.

Mammoliti voiced most prominently that he is still not convinced that an LRT is going to work alongside the community’s tractor trailer traffic with each having different destinations. Mammoliti maintained that the City of Toronto should instead plan a dedicated subway line for Finch with an expectation to build later.

In the interim, he proposed that the TTC could make enhanced service improvements along Finch.

The meeting audience was very appreciative that Mayor John Tory was in attendance for the entire session, even the Question and Answer period at the end. He displayed a remarkable desire to grasp the situation regarding the unsettled issues still on the table. The audience took to applause many times for the Mayor and he was an obvious crowd pleaser. Tory’s understanding that $1 billion was being transferred to the project by the province, was an item that he stood by and urged the community not to pass up the opportunity. He did express support for the items mutually identified as requested improvements to the original plans, backed by the BIA.

Those changes are expected to be on the table when the matter is presented at Toronto Council’s Executive Committee’s meeting in September.

In the Mayor’s words, “we need the LRT to be done right!”

Jamie Robinson, the representative from METROLINX provided the audience with an overview of the LRT project as well as touching on design enhancements that have been made to date. Many have been accommodated at the request of the BIA. The BIA’s supporting document that was made reference to at the meeting is a transportation study that was already completed by Cole Engineering recommending beautifying streetscape improvements, maintaining existing lanes and an overhaul of the existing transportation network serving the BIA. Doing all work together would be cost effective by having all the improvements occur when the new LRT tracks are first being built. This was supported as a better option instead of retro-fitting improvements later and digging up newly poured concrete.

In summary, the BIA’s goals are to accommodate commercial truck routes that keep businesses flourishing and avoid truck traffic encroaching on residential neighbourhoods. One of the area residents that spoke at the end of the formal session pointed out that the Steeles/400 interchange does not allow traffic to head northbound nor does it allow traffic to exit while coming from the north. He called for the proposed transportation study to include aspects that would recommend changing the Steeles\400 interchange to one with full four-way access. All provincial experts at the meeting announced that a transportation study was necessary for most of the recommendations by the BIA and pointed their fingers to the City’s transportation department to pay for it.

Hopefully, Mayor John Tory will look at this matter with great leadership at the standing committee meeting scheduled for September. Tory announced at the meeting that he won’t be so eager to “let METROLINX off the hook” in paying for a much needed comprehensive traffic study either in part or in partnership with the city.

In addition to an invitation to the local MPP, Mario Sergio, who did not attend, our local M.P. Judy Sgro couldn’t be in attendance at the meeting but did send a representative from her office. Various provincial government officials were also invited to the meeting but either could not attend or didn’t respond which meant that no one from the Province was in attendance on the political end of things. Let’s hope that they’ll get the message that more needs to be done to benefit our businesses and residents.

All in all it was a great evening for democracy and everyone is looking forward to positive next steps.