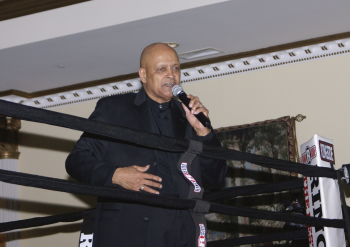 More than 200 people descended on the Julius Banquet centre on Finch West November 14 for the “Emery Village BIA Presents Spider Jones’ Fight For Youth Boxing Championship” (fightforyouth.ca). The first annual event was sponsored by the Emery Village BIA with money pegged for two $5000 Emery Village BIA youth scholarships to be awarded in the new year by former boxer and broadcaster Spider Jones’ “Believe to Achieve” organization.

The lavish evening featured after-dinner amateur boxing along with legends George Chuvalo and former Emery Village resident Razor Ruddock looking on — two of the best heavyweights Canada has ever produced.

“This event is a great example of a registered charity (“Believe to Achieve”) doing it all and helping youth without a government handout,” said Ward 7 Councillor Giorgio Mammoliti, a long-time supporter of Spider Jones’ youth outreach programs in a brief address.

The evening was studded with Bay Street luminaries and people and organizations that have worked with Jones, including Sentry Investments and Greenwin Properties, a group that has been fundamental to the success of “Believe to Achieve’s” Chalk Farm after school drop in centre.

“We love Spider and were glad to be here to support him” said Greenwin’s Jessica Green.

The highlight of the evening was a “Q and A” with Chuvalo and Ruddock with guests and interviewer in the boxing ring set up in the middle of the Hall for the occasion. Chuvalo 76, moved slowly at first past the black and silver linen-clad tables and climbed carefully into the ring, an act he has done countless times. Once there, Chuvalo showed his charisma as both former heavyweights fielded questions and took pictures with attendees. Many took the ring afterward and the evening ended with more pictures.

While several bouts were scheduled, only one amateur bout sanctioned by the Ontario boxing commission, in addition to a sparring session, actually occurred as a result of injuries and last minute cancellations — an occurrence that caught organizers by surprise.

“This was our first event”, Jones said. “I know what to do next time. I feel let down, but you live and learn. I know now to over-schedule match-ups next time. I resisted that approach this time because I’ve been to too many boxing fund-raisers before where there are just too many bouts and you lose the crowd. People attend these things to get a taste, to enjoy great food and take clients and see celebrities and get pictures taken with stars and support a charity, not to feel that they have to sit through tons of bouts. I honestly figured fewer bouts would be more so I didn’t over-schedule it”.

“I had a great time”, said Sean Driscoll of Sentry Investments. “We had George Chuvalo sit at our table and my father (John Driscoll) had Razor sit at his, it was amazing. We even bought a case of Chuvalo’s new auto-biography book to sign.”

Another evening-goer, Guido Derlagen, an IT company owner, said the evening belonged to Razor Ruddock.

“He fought Mike Tyson twice in his prime, truly amazing, and of course Chuvalo fought, Ali, it doesn’t get any better than that with personal war stories does it?”

Spider Jones “Believe to Achieve” charity will conduct an open house and media event for the remodelled Chalk Farm Youth Centre in February and will indicate at that time who will receive the Emery Village BIA youth scholarships.

“Our crime rate is low in Emery Village partly because we are pro-active working with people in the community and Spider Jones provides inspiration, hope and leadership for young people,” Mammoliti said.