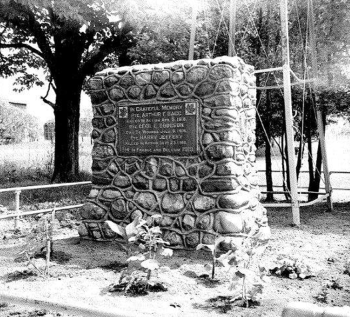 Monday November 11, 2013 once again symbolizes Remembrance Day. It allows tribute to be made to our fallen soldiers of the past. It is a day to remind Canadians of the savageness of two World Wars and to never forget the sacrifice of those “glorious dead” of yesteryear.

Immediately following the first World War, nearly every small town in Ontario built and erected their own cenotaph to acknowledge and commemorate their own fallen heroes. The cenotaphs were monuments, some with statues, some with plaques, some more massive than others but all were righteously unique. The design for construction of each cenotaph was intended that they be a one-off to be artistically modelled by local artists from each respective community.

Emery was no different and in 1917 our own cenotaph was built. It stood prominently and proudly near the northeast corner of Finch and Weston Road, immediately in front of Emery’s newly built school of 1914. A solid stone structure with masonry and concrete work that emulated the distinctive large grooving technique also used on Casa Loma’s perimeter walls.

When the Emery Public School closed down in 1958, both the school and the cenotaph were left alone aging for five years. The building of Daystrom Drive Public School in 1959 and the building of Emery Collegiate Institute in 1961 made the old property obsolete to the North York School Board and was then marked for demolition.

Luckily, we have learned that if it had not been for the quick responding actions of two particular residents of Emery (Jim Baird and George Butterwick) both the 1914 school bell and the 1917 plaque from the cenotaph would have been all but lost. According to son Ian Baird, his dad and Mr. Butterwick raced over to the school property at the Finch and Weston intersection when they saw bulldozers begin to demolish the old property and building on a day in 1963. The school bell and the cenotaph plaque were saved by the two men and both pieces have stood proudly within a cairn in Emery Collegiate ever since.

However, the original monument of Emery’s cenotaph was regrettably bulldozed and levelled on that day in 1963 and was all but driven into the ground. The demand for the rebuilding of Emery Village’s cenotaph needs to be a project that our community engages in once again, to re-erect it. The cenotaph needs to be completely restored but re-erected in a location within our community in a public space that could serve to pay tribute to our fallen soldiers not only on Remembrance Day but all year round.

It would work to be an undertaking of the Emery Village community as a whole as it was originally completed almost 100 years ago.